When Radio Caroline started in 1964 its primary purpose was, apart from making shed loads of money, to put new music to air.  The new music, ‘pop’ music, wasn’t getting played elsewhere, and so the plan was to make shed loads of money by being paid to play it. Good plan, but not overly successful at filling the shed.

Fast forward just over ten years and Radio Caroline was playing the new music of the progressive rock style, featuring long album tracks whilst all around it were just playing the short 3 minute long ‘pop music’ chart singles of the day.

So, in both decades Radio Caroline was down with the kids and providing new music. 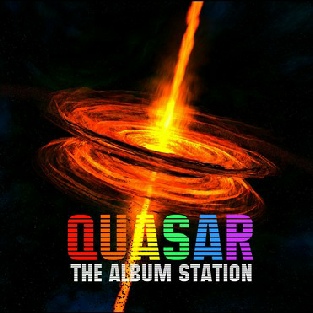 Recently, for whatever reason, a group of the ‘DJs’ from Radio Caroline decided to leave and start their own radio station.  They called it Quasar Radio – the Album Station.

Ok, kudos for using a new name and not recycling a radio station name that had gone before. But didn’t Radio Caroline once call itself an ‘album station’?  And what’s this phrase on the website, “From a point in time to the recesses of your mind!”?  Heck, one of Radio Caroline’s jingles from its ‘hippy era’ says, “From a point at sea to the circles of your mind!”.  I’m starting to see a lack of originality here.

But anyway, the Quasar name sounds exciting and new, so I tuned in thinking I would be blessed with all new music and all the things that Radio Caroline no longer provided.  I assumed it would be rockish, and maybe like the Daniel P Carter Rock Show on Sunday evenings on BBC Radio 1.

As I waited for the next song in the hope it might be exciting and make me all blown away, I read the ‘About Us’ bit of the website.  It told me, “Quasar Radio was created by a group of disenchanted former radio professionals who, to a man (and woman), had grown tired of the very limited fayre available on the radio dial today. “

Yeah, ‘radio professionals’ I mused as the DJ of the moment started speaking. His delivery was very slow and deliberate and obviously glowing with pride that he was talking to all 11 of us who were listening (according to the stats). He sounded like he had a coat-hanger in his mouth. I’m sorry, but I work with ‘radio professionals’ and none of them sound like they are on extreme medication with a coat-hanger in their mouth.  Well, if they did they’d be sacked and end up with the only option of broadcasting to themselves and a few mates from their bedroom on the internet.

Ok Fleetwood Mac and ‘Rumours’ was next. Sigh, another oldie pop song, not quite 40 years old, a couple of years younger than the Janis Ian song I’d just endured.

That was it for me.  I hate oldies. I especially hate the same tired overplayed oldies that can be regularly heard on Heart or any other oldies radio station.

I tuned away just as my mouth started to fill with vomit.

(Quasar Radio, nothing like Radio Caroline, honest, can be found here)