The entire country should be covered in CCTV cameras.  Their output should be fed back to a huge central processing centre, and from here everything that anybody does, every movement they make, should be recorded.

Now then, the liberal wets will be screaming and protesting after reading that paragraph, as indeed will the criminals (assuming there’s a difference). The more conservative will be demanding it be supplemented by compulsory tagging.

But, no, both are wrong, this is the right thing to do.

Along with blanket CCTV coverage of absolutely everywhere would come certain rules and permissions of access to this huge database of human movements.

As a first rule, which may need to be revised of course, the video archive could only be used retrospectively from the scene of a crime.  Let me paint you an all too common scenario from Liverpool.

Almost every retailer, including hairdressers and the tiny haberdashery shops run by 90 year old ladies is subject to a regular gun or knife-point robbery, usually with accompanying violence.  If everywhere was under constant surveillance, then the robbers could be tracked from the point in time of their violence against the lone shop keepers, and fast forwarded to see where they are right now, meaning that they could be instantly located and arrested.  All the evidence needed would be there on video, ensuring an easy conviction.  Sorted.

Overnight most crime would reduce to zero.  The streets would feel safer.  Muggers and house robbers would be all put inside prison (or ideally, in my view, executed) and the atmosphere would feel so much freer for normal people.  Gone would be the tension of intimidation that all city dwellers are normally forced to live with.

Now, of course, those protesting that this is a big brother infringement of our rights and freedoms need to get a life.  This would be a big brother protection of our rights and freedoms.  Obviously, this could not be used to just ‘spy’ on people, and people’s rights could be protected by the access to the database being restricted to follow-up from crime events.  If no crime had been committed, then no spying on you to see who you are snogging late at night in the street.  Instead, the person considering mugging you and your new snog-associate in the street would be thinking twice.  With a 100% chance of identification and capture, he wouldn’t attempt it.

For every crime that a criminal is detected and prosecuted for, there are usual hundreds of others they got away with.  A house burglar doesn’t get caught for the first house he breaks in to.  He has amassed a huge number of victims before being brought to justice for just one, if ever.  With 100% observation, he would get arrested after the very first burglary, meaning a dramatic reduction in the number of victims of his crime, and a greater sense of freedom from fear for normal people.

So, this has to be the way forward.  It could lead to there no longer being a need to lock doors and a greater feeling of community.

Only those who have some vested interest in criminal activity will object to this neat idea.  Just you watch! 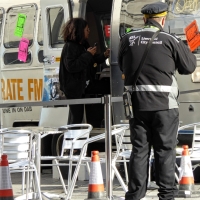