I keep strange and bad company.

These people tell me things. They tell me crazy things.

They talk to me about the Royal Family being lizards, the world being run by ‘the Illuminati’, how powerful (Jewish) families have all the money, how 9/11 was an inside demolition job, and chemtrails! Chemtrails! Never forget the fucking chemtrails. Well, unless you’re preoccupied by fluoride in tap water, how statins and other medication cures nothing but keeps you a slave, and not to mention what’s really in Coke or, worse still, Diet Coke. Artificial sweetener, that’s designed to fry your brain.

And so it goes on and on. Their ability to keep in touch with reality has gone. Instead their brains can only be pre-occupied by paranoia about what’s really going on, unable to use logic or to distinguish what is really going on. Heck, don’t get them started on about elections and politics.

So, freeze frame. What do these chaps have in common? 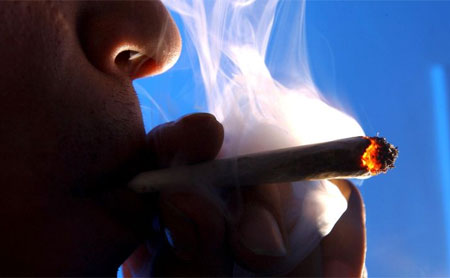 They are extensive users of recreational drugs, especially skunk and the stronger forms of Cannabis.

Aha. Their cognitive abilities are all but burned out by the drugs and what they are mixed with, leaving them in the paranoid chemtrail watching state they are.

These aren’t the people who have just tried out the odd spliff, but the serious users. Decades of mind-fucking with drugs leaves them damaged, and mentally ill.

You may know the type. They even believe that skunk has healing qualities that are suppressed by ‘the authorities’ along with the cars that run on water but ‘they’ won’t release to us prolls. Yes, ‘they’ are constantly working against ‘us’. Paranoia.

Hell, watching the Jeremy Kyle Show on TV for more than 10 minutes reveals the paranoia caused by continuous use of recreational drugs, and how the paranoia destroys relationships. Drug addled brains convince the idiots with them in their heads that their girlfriends are having sex with strangers when they go upstairs to the toilet for a wee. Even a lie detector test doesn’t convince them, “I know I get paranoid but…”

So, what chance have those whose paranoia has them believing the Royal Family are lizards? Sadly, no logic will ever bring them back to reality.

I drink a lot of Diet Coke out of flavour choice and an addiction to caffeine. But the amount of abuse I get from these paranoid pot heads! They tell me I wouldn’t drink it if I knew what was in it and what it does to people.

I retort that at least there’s a list of what’s inside it on the outside of the can. Nobody knows what’s mixed in with the drugs they happily take day in and day out. But, hey we see with our own eyes the effect it has on the user’s mental health.

Should we be rounding up these paranoids?