16 December, 2014 Christopher England Behaviour, Christian, Religion, Social Engineering Comments Off on Why do Catholics have sex with children?

According to itself, the Catholic Church requiring its workers to not have sex is directly linked to them having sex, usually of a homosexual nature, with children. So concludes their extra special research into themselves.

This is a religion, of course, which means it is based and founded on the most illogical beliefs in the first place. Beliefs that are forced into children from birth, such that they end up being very skewed and troubled in their understanding of reality.

Hence why, I guess, they actually believe this to be true.

Now, it seems to me that there are a number of hurdles one has to leap over in order to arrive at the position of abusing a child sexually. 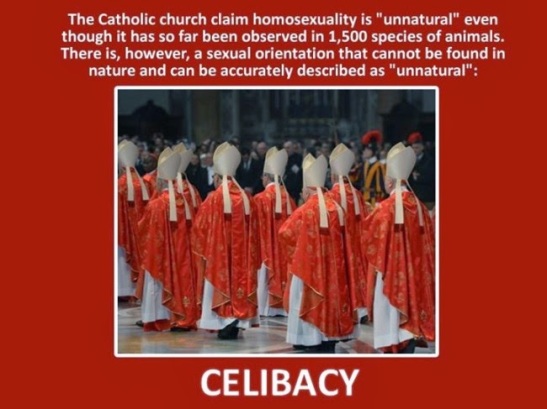 Firstly, whilst being forced to be celibate as part of your job might be extremely sexually frustrating, surely that frustration would manifest itself in a number of ways.

Secondly, despite the job description forbidding sex, it would make sense that natural ‘straight’ relationships would develop in secret between male priests and nuns.  Obviously this would be forgiven by whichever deity punishes fuckers rather than wankers.

If the sexually frustrated priest couldn’t find a nun to play with (maybe because he’s far too ugly even for a woman hiding inside a penguin suit), he could always visit a prostitute.  Or get one to visit him.  When the story of Jesus was being re-written by the Catholics, they re-positioned Mary Magdalene as a prostitute that used to hang around with Jesus and his Jewish mates, instead of her being Jesus’s wife.  So, Catholicism has a bit of a thing about prostitutes.

Once again, after having sex with a prostitute, a priest can probably get forgiveness from whoever is allocated to hear the confessions.  Poor Mary Magdalene may well have to listen to all this for eternity.

Ok.  So, thirdly, let’s imagine this forced celibacy and associated natural sexual frustration draws priests to other priests or to lesser important clergy within the church who feel the unwritten rules of the job are to provide orifices for those higher up the food chain.  As in it’s relief is via the consenting homosexual act with another.  They might not even be naturally homosexual, but find the pleasure and relief from the homosexual act does the job, even though it is very very illegal according to the rules they signed up to.

Right, here we are at the final hurdle.  The final taboo.  After exhausting all the other options, there comes the child sexual abuse ‘option’.

Even if a child appears to be giving his consent, he is actually far too young to legally or morally give it.

Catholic officials have a duty of care towards the vulnerable, especially children.  Child protection in itself should be a rational reinforcement of the reasoning behind not choosing to deal with the enforced sexual frustration of celibacy by hurting children.

And yet, with all these hurdles in the way, all of which should really stop the option being to abuse children, child abuse within the Catholic Church ran rife since it was created and is only just being addressed and taken seriously as an actual evil that can’t be swept under the pulpit any longer.  Now they want to explain it all away.

How come their special research doesn’t highlight this?