Years ago when women were accused by the religion of the day (usually Christianity) of being witches, the representatives of that religion couldn’t wait to burn them.  To them it was exciting and fun.  To them it was also a way of ensuring that everybody else was compliant and sung from the same hymn-sheet, literally.

The same was, until very recently, true of how they would treat people who denied the existence of their god. In fact, in many countries this is still the case.  The Catholic church is famous for how it punished those who went against the traditions and teachings that, for example, the world is flat. 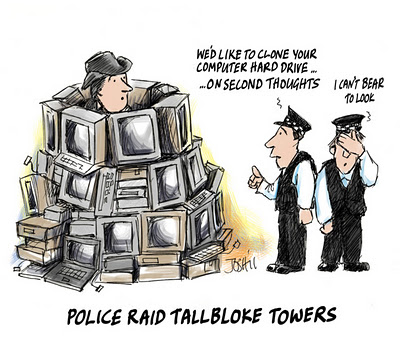 One of today’s greatest and highly intolerant religions is the Global Warming religion, the religion of the ‘greenies’.

Those who ‘believe’ are as passionate about it as those who ‘believe’ any religion that went before it.  Strangely, statistically, most ‘greenies’ are ex-Catholics or were brought up in a very religious household, and having rejected one church they have joined the new one.

This does mean however, that they bring with them their instinct to shout bile and hatred at anybody not conforming to their way of thinking.  They would love nothing more than to be able to burn at the steak anybody not complying to ‘greenie’ rules. The number one rule is of course to believe without question that we are all doomed and that mankind is to blame for something, anything, and for now that’s manifest itself as Global Warming.

Hence why there was all but dancing in the street as a response to police action against a climate sceptic blogger I reported here.  Reading the ‘greenie’ blogs it was almost as if they were salivating from the stench of the burning flesh they so long for.  They just couldn’t contain themselves.

Some ‘greenie’ bloggers went over the top and badly libelled ‘Tallbloke’, the man who was visited at home.  They suggested he was behind or in some way part of the removal of thousands of emails from the University of East Anglia, as they continued on their virtual dance to the rhythm of a beating drum, chanting ‘criminal’ at him.

‘Greenies’ by their very nature aren’t actually able to face the truth, hence why they believe what they want to believe and vilify the rest, and is why they were very happy to lie and distort the truth with regard to ‘Tallbloke’. They do it with regard to the Global Warming religion, so it’s to be expected of them to distort or misrepresent anything else, especially if it’s relating to what’s happened to a ‘sceptic’ of their religion.

Hey, years ago, they’d have been doing exactly the same about a poor old crone they’d decided was a witch, it’s something they are hard-wired to do.  The truth is irrelevant to them.

Indeed, as we all know the ‘Climategate’ emails showed the climate science in a very bad light, and the activities of the climate scientists and those non-scientists who were demanding ‘on message’ results only, were completely unforgivable.

The ‘greenies’ have a different take on this of course.  They won’t usually discuss the actual content of the emails. Instead they will emphasise with deliberately chosen syntax that they were ‘stolen’ by ‘thieves’.  This is a bit like shouting down anybody daring to ask a sceptical question with the frightening word ‘Denier’ with all its anti-Semitic meanings. Yes, ‘greenies’ chose their language very carefully.  Hence why they swapped up from ‘Global Warming’ to the more sinister sounding ‘Climate Change’ as the title of their religion.

For the ‘greenies’ the emails are nothing, prove nothing, and indeed, they’d rather this ‘stolen property’ not be viewed or discussed by the general public, in the same way the Catholic church would much prefer to have just hushed up and had nobody utter in public a single word about the centuries of child abuse.

Don’t talk about, don’t acknowledge it, give the people something else to worry about by telling them they’re going to die and it’s all their fault, and you get away with whatever you want to get away with.  This is the way of all organised, structured and intolerant religion, and so is the way of the ‘greenies’.

But they do give us something to think about, and prove one simple point:  If there are ‘greenies’ happy to lie, distort the truth about what happened and the motivation for the police visit, as well as actually libel a sceptical blogger, haven’t they just proved that they also can’t be trusted to tell the truth about anything else, least of all man’s contribution to Climate Change?