7 August, 2017 Christopher England Behaviour, Liverpool Comments Off on How to save taxi fares

I would never normally use a ‘black’ cab. The hail and ride taxis that are iconic in London, and equally infest my nearest city of Liverpool.

‘Black’ cabs, apart from pumping out clouds of soot and dirty diesel exhaust, are one of the most expensive modes of transport. I’d always book an Uber every time. Fully licensed Uber taxis don’t short change, are happy to receive card payments (and tips) via the app, and the app guides them to my destination instead of them making it all up.

Loads of taxis in Liverpool were recently seized for being dangerously unroadworthy during a blitz of late night sting operations by the police. Scary. People could have died in those!

Well, I found myself forced by an associate to get into a ‘black’ cab. It was dirty and smelly. Indeed, it smelt like a cross between an uncollected for 4 weeks wheelie-bin and an ashtray. Yeuch.

The driver was one of those typical fat wide annoying looking blokes who you usually see blocking the road by standing next to the driver’s door of another cab in a rank, making cars driving by have to swerve. When he’s driving he’s probably aggressive, cuts people up and has no idea how to make the indicators flash before turning.

Well, blow me down, about 300 metres from our destination, he lights up a cigarette. Er, which is illegal. You mustn’t smoke in a vehicle used for business. You mustn’t smoke in any public carriage vehicle. Not only is it illegal, but it’s annoying. I hate cigarette smoke, and certainly have no desire to smell of it let alone breath it in.

I knocked on the glass. “Can you pull over, please?” He looked annoyed but did. I ordered my dazed and confused associate out on the pavement.

“Then, that makes that quite an expensive cigarette you are illegally smoking there, doesn’t it mate?”

“Cool. You know you’re not allowed to smoke in your cab, right? I’ll show them the video I took of you smoking illegally. That’ll be a prosecution and loss of licence, mate. You ok with that?”

“Fuck off, you cunt!” he offered as he suddenly sped off.

Now, that’s the way to save on taxi fares. 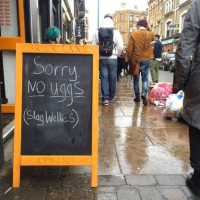