31 January, 2015 Christopher England Behaviour Comments Off on Can I pay by wet fish?

The contactless ‘pay tags’ come with a sticky back, and the suggestion that you stick them to the back of your phone, since you always have your phone with you wherever you go.  You carry your credit/debit cards less so, apparently.

So, when we first got the ‘pay tags’ we dutifully put them on the back of our phones. This was fun because the bored drive-thru cashiers would go “Wow!” and assume we were using some super-app on our phones. This was a great wind-up, leading to many an opportunity to slag off iPhones by, quite honestly, saying the cashier’s iPhone wouldn’t be able to do it and ask if she/he had considered getting an Android.  Cashiers always have iPhones, so this was cruel but kind.

Eventually, of course, it was no longer a novelty bopping a phone on the card reader. The cashiers would remain unimpressed and get back to concentrating on talking to two different drive-thru order points at the same time.

You’d still have to say, “Can I pay by contactless?” to indicate you don’t need them to give you the card machine, but instead to just hold it out on the attached ‘selfie stick’ so you can bop it with your phone.

Well, time moved on and phones had to be upgraded, meaning ‘pay tags’ had to be carefully pulled off the backs of the old ones.  But they now had no real ‘sticky’ left, and so kept falling off anything else we tried to attach them to.  They kinda became redundant.

Until we came up with an idea.

Putting the ‘pay tag’ inside things meant that we could start to excite and mystify the cashiers. At first we’d still say, “Can I pay by contactless?”, but we’d then bop the card machine with, say, a piece of toast with the pay tag hidden inside.

One day we started saying, “Can I pay by toast?”  And when challenged to repeat, say, “Yeah, contactless toast, contactless, you know?”  The inclusion of the word ‘contactless’ would be enough for them to offer the machine on the selfie stick, and they’d watch puzzled as a piece of toast would successfully pay the bill. 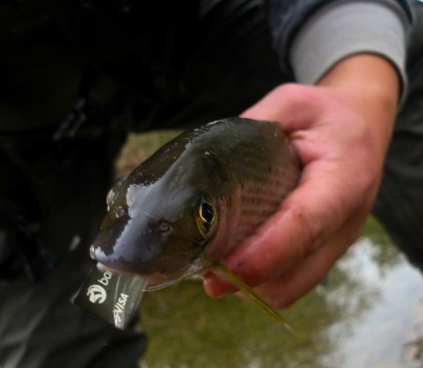 Paying by toast finished after the toast became old and putrid. It was at this point that we went through a number of other items, including a plastic duck and a bar of soap.  Something was missing, however.  We weren’t satisfied. We needed to push the boundaries.

It was at this point that we bought some wet fish.  Wet, slimy, smelly fish. This is what we wanted.

Except of course, it wasn’t quite contact-less.  Slapping the card machine with a ‘thwack’ and leaving a river of dripping smelly slime all over it was probably going too far.

We got told off and banned from that particular drive-thru. So, be warned, don’t buy a big smelly wet fish and offer to pay using it.  Like us, you’ll be guilty of ‘jumping the shark’.