8 June, 2014 Christopher England Behaviour, Social Engineering Comments Off on Or This Could Be Hell

I was strolling along the road, cool wind in my hair, lost in chatter when I heard it. That terrible terrible awful awful song.

I sighed and said, “Oh no. Kill me now, stab me with your steely knives…” out loud.

The singing was coming from the inside of what was obviously an old people’s home. The day room or lounge of the old people’s home with no pink champagne on ice, where normally the inmates are forced to sit with vacant expressions, drooling in front of a TV loudly blaring out MTV or some channel that has no programming of interest to them, but of interest to the young staff, obviously occasionally plays host to performers who come to entertain the inmates by singing songs at them.

I felt so sorry for those sat slumped in God’s waiting room, all just prisoners here, unable to make it stop or go away. I shuddered, as I considered how awful it must be to be trapped with such torture as one of your last experiences before shuffling off this mortal coil.

The singer will of course be allowed to go free, to strike again at more slumped seniles from the generation that grew up with one of the world’s worst ever songs.

For the captive audience, well, they can check out any time they like, but they can never leave. 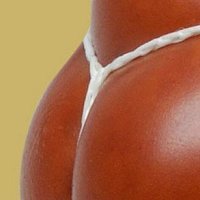