Three of the main world religious viruses started in the Middle East. Of the three, Christianity appears to have matured to being one of the least violent and indiscriminately cruel. It’s had its day of executing lone women, scientists, philosophers, and going into countries on pointless macho crusades. OK, it still does that a little bit.  Mainly, it’s occupying itself with invading countries in accord with a set of rules, which include killing people within that set of rules that make killing more humane and less barbaric.  Oh, and Christianity these days also functions by getting lots of other countries to OK (or ‘mandate’) the invading in the first place.

Christians often do the dirty work of those suffering from the Judaism virus. Jewish direct violence and indiscriminate cruelty is reserved for those of Arabic descent that live in Palestine.

Meanwhile, Islam has definitely matured into something quite evil. The violence and indiscriminate cruelty is unparalleled in this modern world. The death toll of innocent victims, including babies and young children far exceeds the death toll from any other religion. 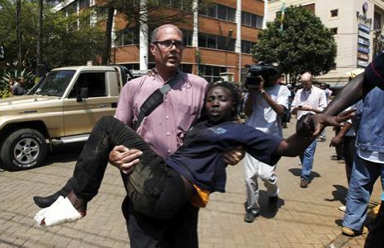 Look at the actions in Kenya. Children directly shot. Babies directly shot. Kenya is just the latest place suffering true violent and awful indiscriminate cruelty. Those infected with the Islamic religion virus that causes the mental illness that allows them to internally justify such outright cruelty, are just the current crop of a never ending wave of easily hypnotised drones ready to explode (sometimes literally) with pure viciousness.

What the heck can be done?

Islam, we keep being told, is the religion of peace.

It clearly isn’t.  Seriously, it isn’t.

None of the Middle Eastern originating religions is a religion of peace. They never have been.

Somehow we need to educate these people. Only through education can we teach them that this kind of behaviour is not normal and not acceptable. The fact that the virus can take hold of them to such an extent that their life means nothing and they are happy to end it alongside as many other human beings as possible is an illogical act. It can only be performed by somebody who has had all logic and reason dampened down or switched off. The Islamic virus does this to these people so completely.

Once all logic and reason has been removed from the person suffering from Islamification, they are consequently putty in the hands of those who then command them to execute such atrocities as those that have happened at the Westgate shopping mall.

It’s interesting that those who command these jihadists never seem to involve themselves in anything that might lead to their own deaths. Their hypnotised fodder are less lucky. Death is always the goal.

There may be aspects of Islam that are peaceful, and there are definitely very many peaceful Muslims, but the religion was originally designed as a tool to keep warriors in check, and to instantly call them like drones to go into a battle they have no real understanding of. Nothing has changed since Islam was invented.

This cycle will keep on going until anybody and everybody suffering the religion virus, especially the Islamic strain, is inoculated against the devastating ability to be so completely hypnotised and commanded to do what a few commanders command.