20 October, 2011 Christopher England Christian Comments Off on The end is nigh. Again.

Damnit!
It’s the end of the world.
Again. 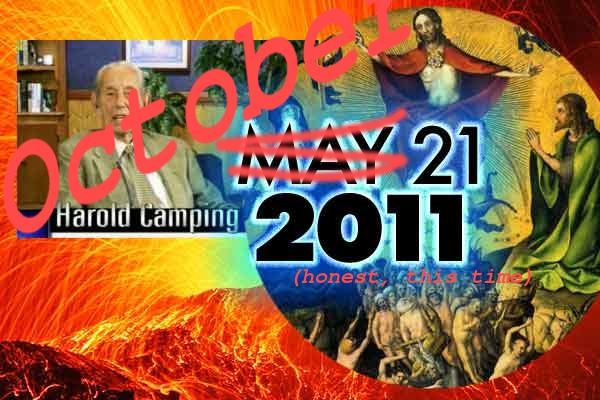 That raving loony god-bothering and preaching bloke Harold Camping who had thousands of followers selling up everything and going around advertising the end of the world was kindly scheduled by their god for May 21st, is confident it’s happening all over again, but today.

On the off-chance that today it is the end of the world, again, I haven’t paid off my increasingly huge monthly Barclaycard bill.  We live day to day on Barclaycard (they are a wonderful organisation, much misunderstood, and deserving of great love) and pay it off every month, but I’ve noticed that even though we don’t seem to be buying anything more than we used to, the total amount we are spending and obviously having to pay back seems to have increased phenomenally.  Quite literally it has doubled in the last year.  This is how I know that the cost of living is suddenly getting seriously high.

(Pause for accidental innuendo there to take effect)

Anyway.  So, I’m guessing that the way to deal with all these global money problems is for Camping’s god to do a mega-reboot by hitting Control+Alt+Delete on all of us.  Now, although the earthquakes and global destruction releasing the fire and brimstone to destroy the cities around the world didn’t happen on May 21st, apparently this doesn’t mean it wasn’t judgement day.  The already spoken of back-up date of October 21st – gulp, … TODAY! – was the next bit of the somewhat protracted end of the world end, with, according to Camping, most of us having spent our time suffering all the torture and pain that Christians so love to believe will visit those who aren’t as goody goody two shoes as they are (I’m never sure how ‘goody goody two shoes’ it is to wish such things on others, but hey, I’m no Christian).

None of the bad stuff happened, and despite this obviously upsetting Camping to the point where he had a stroke some weeks after the world as we know it not ending, he revised his pontifications to inform us that we were ‘judged’ silently.

So, I’m wondering if my ever increasing Barclaycard bill is Camping’s god giving me months of ‘hell on earth’ ahead of me disappearing forever today.  It’s possible, isn’t it?  I mean, his god moves in mysterious ways.  Why did Camping’s god ‘punish’ him with a stroke?  Seems a nasty thing to do to such a devoted follower.  Or maybe it was his god lashing out at all the constant whining and moaning and bothering.  A kind of frustrated divine, “Shut the fuck up!”

Well, whatever the truth, me and my unpaid Barclaycard bill are sitting here content in the knowledge that deep down inside I just don’t care about people like Harold Camping.  I should feel sorry for him, being as I’m an atheist and therefore have far more compassion for my fellow man than god-botherers.  He obviously has a severe mental condition that makes him so delusional, but he has caused so must pain and suffering amongst those he has so easily led.  I’m not sure that should be forgiven.  ‘Leading’ people comes with a responsibility.

When (or should that be ‘if’) the world doesn’t end today, then apart from my relationship with Barclaycard having soured, I will be wondering how Camping’s inner head will deal with it all.  Having already had the stroke, much as I despise what he does to people, I hope he doesn’t end up suffering from the shock of failure so much that he alone has another stroke or heart attack and goes off to meet his maker.  That would make it feel so very wrong to laugh and point at him in the future.