19 October, 2013 Christopher England Behaviour, Politics, Social Engineering, Social Media Comments Off on Jumpergate and those who want to believe

How can any of us trust the mainstream media about anything any more?

Why are they so desperate to create a story that shows our Prime Minister, David Cameron, to be an unfeeling, uncaring, out of touch knob?

I mean, for feck’s sake, find something truthful for us to all tut tut about, surely.

It all started with Ed Davey. Pressed by Jeremy Paxman on BBC2’s Newsnight programme he agreed that he sometimes wore jumpers at home.

“I am sure people do wear jumpers, I wear jumpers at home, but you are missing the point here Jeremy, we do need to help people with their bills, I am extremely worried about them, we can use competition the way we have, we can make our homes warmer and use less electricity and gas by going more energy efficient,” said Mr Davey.

Immediately following this the headlines from the left-wing press foamed with bile about how Ed Davey, our Energy Minister, had said we should all wear jumpers, continued with their mocking about how this proved the Conservative party is out of touch.

The problem is that Ed Davey never said anything about whether or not people freezing in their homes should wear jumpers. Yes, he was asked about jumpers, and he mentioned jumpers in reply, but at no point did he say we the public should deal with this winter by wearing jumpers.

The Daily Mirror was desperate to find some way to make a huge story about how the Prime Minister was out of touch. So, they sent a reporter off on a mission to try to get Downing Street to say that David Cameron was telling people who can’t afford to pay their fuel bills this winter to wear jumpers.

No such statement or suggestion came from the Prime Minister. Despite this, they ran with the story anyway.

Downing Street then issued a statement: “To be clear, it is entirely false to suggest the Prime Minister would advise people they should wear jumpers to stay warm. Any suggestion to the contrary is mischief-making.”

However, the seed had been planted and the great unwashed on social media were running with it. Cartoons and various pieces of hate speak were distributed and redistributed and shared, shared, shared and shared again across Facebork, Twitter, and every other social media invented. The hate speak was taking as a given that the Prime Minister has dismissed cold people with a “put a jumper on then you prole”.

I found myself copied in on quite a number of bile spewing cartoons and those photos with headline writing across them that normally star an angry looking cat. Instead of a cat there were angry looking words about how dare the out of touch Prime Minister tell us to wear jumpers.

On just one occasion I bothered to respond. I said something like, “It’s not actually a true story you know,” and politely included a link to a BBC news story about the non-story. I got back an angry “Yeah, well you can’t trust anything the BBC says, they always defend the Tory trash!”

Ma, this response was telling me that they were as desperate to believe the Prime Minister would say such a thing as the mainstream media was for them to believe it too.

What is this all about?

Does the real truth no longer matter to anybody?

Isn’t it a little frightening that news media should want to completely invent news stories, and that even though they are not true there are people so filled with hatred and loathing that they don’t care they are not true, they just want to ‘believe’? I find these people extremely scary. Don’t you? They are exactly the same people who centuries ago went round accusing people of being witches and despite the lack of any evidence would happily and excitedly just kill them for being witches. 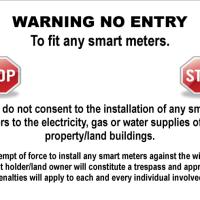