8 March, 2011 Christopher England Behaviour, Liverpool Comments Off on Liverpool’s frontline against the robbers 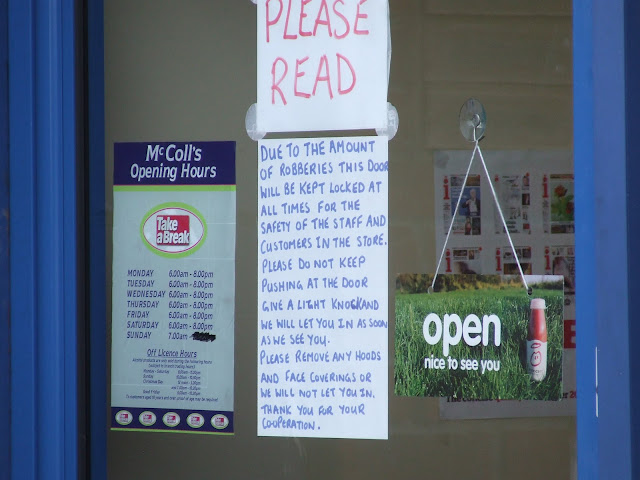 When I moved to the Liverpool area from a poor run down London suburb, the first thing that shocked me was the sheer desolation that I’d not seen before.  Man, there’s run down and then there’s the suburbs of Liverpool.
Badly lit streets dominated by boarded-up houses and the flitting in the distance of the always dark charcoal coloured clothing of the hooded rat-like street scallies (scum) making ready to set fire to another building, intimidate passers by or sell skunk, were things I just wasn’t used to.
Yeah, it can be scary living in London, but it’s in a very different way and for very different reasons.
The shocking reality of what people have to put up with in Liverpool, or just come to accept, is completely demonstrated by the reaction to all of this by the retail sector here.
To avoid the overnight break-ins, theft and arson, every single retailer has extremely tight fitting shutters that lock his business down at night in the hope that it’ll still be there in the morning.  This doesn’t deter the scum that then discovers that by breaking in through the roof they can completely strip the place of cigarettes and alcohol.  Such items are then openly resold in almost every local pub.  A tiny grocers in North Liverpool has recently had three such break-ins in two weeks, with hundreds of Pounds worth of damage being done to the roof, and thousands of Pounds of stock being repeatedly taken.
The biggest fear for anybody in Liverpool retail is not what will happen to their premises overnight, but what will happen to them by day.  Even hairdressers, upholsterers and Greg’s cake shops become the targets of the armed robbers (guns are extremely common place here) who will quite calmly go about their chosen business of frightening or hurting people to get them to hand over the tiny amount of takings in their tills.
Ordinary people working for minimum wage are now in the front line for the pistol whippings and broken bones they are given in exchange for not being fast enough to hand over all their day’s takings.  The demand for free money is getting bigger the more the Government cracks down on the Benefit payments that these crack users previously spent on their drugs, and so it’s the retailers that have to fund it all now.
Most off licences in Liverpool are now built inside a bullet-proof glass cage.  The customer mouths to the server and points at the items they can see through the glass that they want to purchase.  The server walks around the displays picking up the goods and then exchanges them for money through a little serving hatch which is suitably constructed to not allow the customer access to the till or to, well, anything. 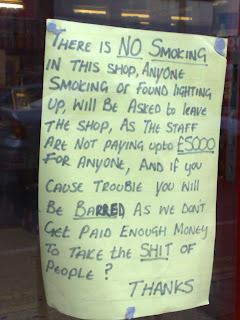 We don’t have these sorts of off licences down South.  Yet.  It was quite a shock to see them, and certainly brought home the high level of robbery and violence Liverpool has as standard.  An off licence not operating in this way would be out of business within weeks, apparently.  Down South, the retailer stands behind a counter, but no screen, and the customer picks up the goods then tenders their payment at the counter just like they used to in Liverpool back in the olden days.
When not being robbed, the next thing the retailers here have to put up with is general abuse and aggression.  Everybody always assumes that rules don’t apply to them, Liverpool is an extremely self-centred take-take-take society and seems to have been this way for decades.  This leads to chaos, and the poor desperate meanderings of notices pleading with people not to smoke in their shop do nothing to stop them.  Neither do they leave their attack dogs outside.  Yet, it’s the shop keepers who get it in the neck when the customers don’t comply!  That seems hardly fair, but I guess a warning from the Trading Standards or Health and Safety people is better than a broken jaw from a smoker.
Meanwhile, not too many miles away in the far more rural area of Knutsford, things are a lot calmer and casual (despite being on the flight path in and out of Manchester), retail is less dangerous, and, at least for now, the humour is able to flow in the shop windows: 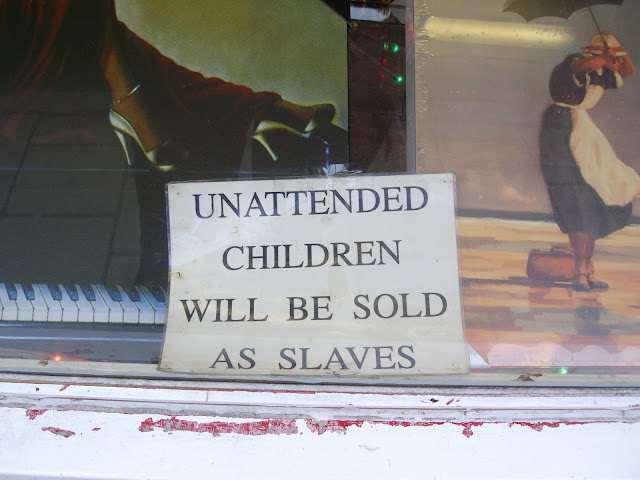