Liverpool, not unlike other cities full of out of control scummy children, is terrorised by scrambler bikes being ridden illegally on the wrong side of the roads, pavements, alleyways, and through parks, playgrounds and shopping malls.

The riders know they are doing wrong because they deliberately wear intimidating ski-masks and scarves in order to hide their identity in a premeditated attempt to escape from prosecution.

Recently, one of these scum crashed into a car and died. Heck, it’s harsh, but it was his choice, and it was an inevitable consequence. Nobody forced him to race around on an illegal scrambler bike, with no professional bike training or licence. If anything, his parents should be held accountable for allowing him to terrorise the neighbourhood. But, they never will be. 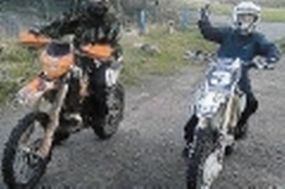 My take on this is that at least he never killed or maimed any innocent people, and his death means one less bundle of anti-social behaviour terrorising the local area. Harsh, but good riddance.

However, for the majority of scrounging scummy mummies in Liverpool, Facebork is the place where they are shedding a tear for this lad. They are mourning him and saying what a wonderful chap he was. Erm, no, he wasn’t wonderful. He drove around the place at high speeds on a scrambler bike, ffs. That is not the action of a wonderful boy. It is the action of a dangerous moron.

There will be many more that will take to the streets to take his place. Morons come in packs in Liverpool, and their parents are out of control and don’t care. Hey, that’s a point: How do they afford these bikes, since most are on benefits? Yes, I know the majority have been stolen, but I’ll leave that for another day!

The crux of the matter is that a majority of the scummy households in the free houses that these anti-social scrambler riders come from see nothing wrong in what they are doing. These are the same people who will stab a teacher if they dare say anything negative about their child. These are the same people queuing at the cash machines at Midnight to get their free money in order to buy drugs.

The menace of these bikes will only go away when they are a) all dead, b) all arrested, or c) actually acknowledge that it is wrong and stop it. Option ‘a’ is harsh but as long as nobody else gets hurt, it seems the most efficient.